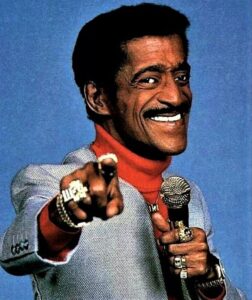 Several years ago I agreed to write the screenplay of Sammy Davis Jr.’s life story for Actor/Comedian Tommy Davidson through a mutual friend of ours, Tommy Pooch, who is actively shopping the script around with Tommy Davidson.

The daunting task of taking Sammy’s life which spanned 60 years on stage from vaudeville to television to movies to Broadway and London productions, mixed with the Civil Rights Movement and the Rat Pack generation of stars to his music, dancing(hoofing), losing his left eye in a car accident, and squeeze it into basically a two hour movie was to say the least an incredible, if not, overwhelming challenge.

It was like writing a real life Forrest Gump Movie.

But I loved Sammy and really wanted to honor him the only way I knew how. So I looked up everything I could about him on You Tube to actually watch as much footage of him as I could. There is a wealth of great videos of him even all the way back to when he was 7 years old and played in a movie, RUFUS JONES FOR PRESIDENT, in which he gets to sing and tap. WOW! Talk about having enough material to use. But still, I had to put together his personal, offstage life which was the most difficult of all. Sammy was extremely complex to put down on paper, because he was a great guy, but like all of us, with flaws, and an ugly side, and I needed to show that side of him while striving to keep him sympathetic and likeable, and most of all, redeemable. And it had to be truthful. Since I never knew Sammy personally that was the hardest part of all. I can only hope I succeeded. As Tommy Davidson told me when I completed the first draft, “You are the first person to put pen to paper to write Sammy Davis Jr.’s life story as a movie.”

Although, it has been several years since I completed it, I recently picked it back up and did a complete rewrite, tightening it where I could, rearranging scenes and making it, I believe, even better than it was. I put on my producer’s hat and cut it from 150 pages to 129 pages, streamlining it while keeping the theme and emotional aspect of it intact.

I don’t know what, if anything will become of it, but certainly, the time is ripe for this story to be made into a movie. Hollywood loves biopics, and whose life story is better to tell than perhaps the greatest entertainer of the 20th century.

As it has been a dream for Tommy Davidson to play Sammy, I can only hope and pray he gets that chance and the script they use will be mine. 🙂 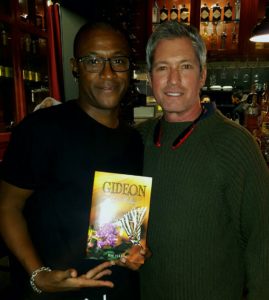 Tommy Davidson and I at the Hard Rock in Hollywood after one of his stand up shows. Hilarious, by the way. I presented him with a copy of Gideon the Novel and he graciously took this picture with me.

In any case, here is the logline and script.

Sammy Davis Jr. becomes an American icon and a celebrated Hollywood entertainer, while battling constant racism and struggling with the trappings of his celebrity.

As always, whoever reads it, I not only hope you enjoy it, but would love for you to leave a comment for us at the bottom of the page.

We thank you again for visiting.